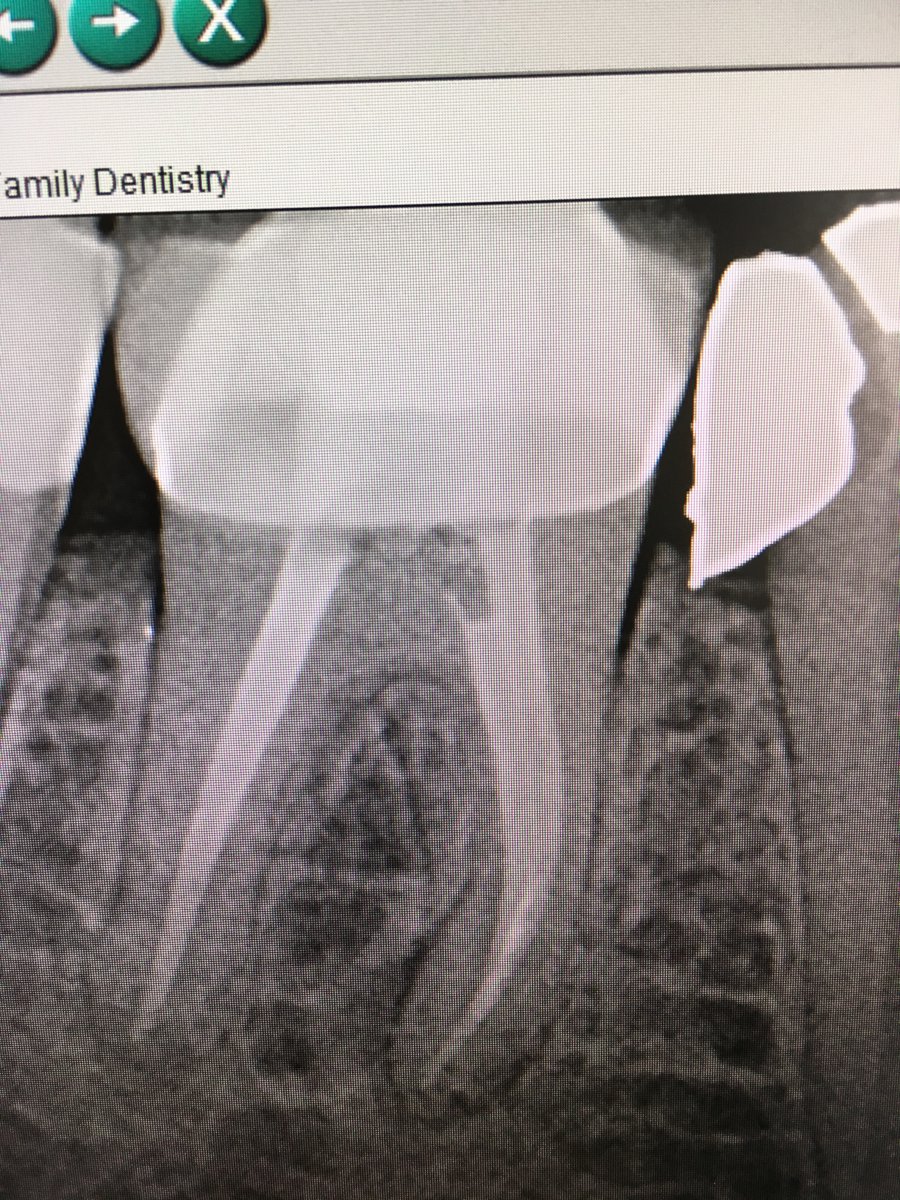 I need some advice, and I’ll try to make this short. I had a root canal done by an Endodontist back in March. He placed a temporary filling in the tooth, and the tooth already had a crown on it. I went back to my regular dentist two or three weeks later for my permanent filling. I kept having pain in my gums even after the permanent filling was placed, so I would keep going back to my regular dentist. I was told it was the tooth behind it, the tooth in front of it, the bite is too high. Now I did have cavities in those teeth I mentioned that I got fixed and I also had the bite adjusted on the root canal tooth. The gum pain kept on, and I had a weird sensation if I rubbed the top of that tooth. I thought this was weird, but I figured it was taking a long time to heal because my dentist said the root canal looked great.

Fast forward to a few weeks ago. I am now seeing a new dentist, and I had cracked the filling that my previous dentist placed earlier this year on the tooth in front of the root canal tooth. I had that fixed a few weeks before Christmas, and while I was there I mentioned again my gum pain on that root canal tooth. The X-ray showed signs of infection. I know root canal treatments can fail, so I wasn’t upset too much about this.

I didn’t get upset and mad until I went to see the Endodontist and he told me why I have been in pain since March. My previous dentist left the sponge/cotton pellet the endodondist put in there when he did the temporary filling. So my previous dentist filled my tooth while leaving a sponge in there. He also only halfway filled the tooth in when he permanently filled it in. I did get a second opinion and they confirmed what the Endo stated. I’m posting the X-ray to show you. Maybe it will help.

I called my previous dentist and told them what happened. He is currently not wanting to take responsibility for the problem. I was told it will cost $950 to retreat the tooth. I feel like the dentist should have to pay the bill, but right now he’s not offering. I don’t go back to get it fixed until the 3rd, and they have been closed since Christmas.

He supposedly told the Endodontist that the presence of a sponge was not noted on the notes that was sent over and that he didn’t see it while filling it.

1. Is it common practice to place a temporary filling in a tooth that has root canal treatment, but already has a crown? The Endodontist said he would permanently fill it this time around. Why didn’t he do this the first time? This would have saved me all this trouble.

2. Is it common practice to place a sponge/cotton pellet in a tooth after a root canal treatment? If so, why did a dentist with over 25 years experience not see it? Just a hypothetical question.

3. Is this a case of malpractice? All I want is my previous dentist to pay for retreatment. I think that is only fair and the right thing to do since he left the material in there. I’m not sure what my legal options are.

4. This will be a somewhat stupid question, but I want to verify. Do dentists have to keep extensive records of their findings? Like if he opens the tooth up and it is indeed a cotton pellet left in there, will he note that in his records? Just in case this goes to a lawyer for review or whatnot.

***Here is an X-ray of the tooth. Yes, I’m aware of the cracked filling shown on the X-ray. This was taken the same day I had the filling fixed. This is not the cause of my gum pain I’ve had since March.***
Last edited: Dec 31, 2017
Ad

Did you get a response on this? I have something similar that happened to me.
Upvote 0 Downvote
Ad

I am sorry to hear about your case.

Usually after a root canal has been completed, a permanent filling is placed. The only time a temporary filling might be placed, is if the treating dentist is considering additional treatments on the tooth, such as a new crown, or if the dentist is unsure about the outcome of the root canal treatment, and might want to retreat it.

A cotton pellet is usually placed after the first step of a root canal treatment, after the nerve has been removed, and covered with a temp filling. This is done to close the " hole " and allow the medicine to work on the inside of the tooth. After a certain period of time, you then go back to the dentist, and he removes the cotton pellet and then finishes the root canal treatment, ending with a permanent filling.
If the cotton pellet was left, it could lead to a failure of an adequate coronal seal, and lead to leakage, which might end up in root canal failure.
If the cotton pellet was left, with a temp filling, because the dentist was still planning a new permanent crown or restoration, this should have been communicated with you.
All this should also have been part of his dental records.

I feel it is reasonable to expect the treating dentist to come to an agreement with you, because if this pain was caused by the lack of coronal seal due to a leaking temp filling/ cotton pellet left in situ, and it was not communicated with you that it was left in for a reason or that you have to go back for additional treatment on the tooth, then the dentist could be held liable.